A Legal Marketing Fable: The Pony and the Pen

Our team had a single, simple marketing goal: Get 25 clients signed up for the next workshop. We tried every marketing trick in the book, and for a moment it looked like we were going to make it. But at the last minute, our clients bolted and the event flopped.

A little background: We were playing a game called Leadership in a Box. Four of us (the marketing team) were trying to persuade one small pony (the 25 attendees) to step over a 3-inch pipe on the ground and into a pen (the workshop). We could not use any equipment like a halter and lead rope, we could not talk, nor could we touch or "bribe" the pony with treats. We had to persuade him (that's called marketing!). 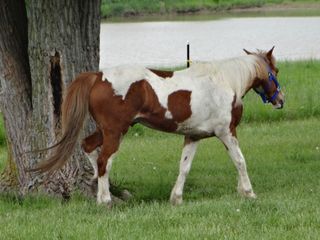 Now, you would think that four people could sort of "surround" a little pony and pressure him to move forward, right? Well, you would be wrong!

See -- ponies have this thing called "attitude," and they don't respond well to "pressure."

We got behind and beside our little pony and we pushed and pushed into his space. He moved forward. Then he bolted and ran off.

We followed him. And we pushed and pushed into his space again. He inched forward. We pushed. He inched. We pushed some more. When he was just about ready to step over the pipe, we encouraged him by pushing again. Pony spun and bolted clear across the arena and away from us. He was done. He was having no more to do with us at all. When we even tried to approach him, he would bolt and run.

A few moments later, three of us left the arena. We sent one person in to wrangle the pony.

She walked quietly up beside the pony, standing at his shoulder. She bent over to bring herself down to his level.

The pony did not run away. In fact, he turned his head to look at her.

Then she took a step away.

The pony stepped toward her.

She stepped away again.

The pony stepped toward her again.

She walked away. The pony followed.

Calmly and quietly, the pony followed her all the way across the arena and right into the pen.

It's not about pop-up ads, e-blast campaigns, or high-pressure sales. The more we pressure people (or ponies), the more they just want to get away from us -- and all that pressure. But when we approach people with true Leadership -- Leadership that is calm and balanced, respectful and relational -- people choose to follow.

They are not troubled and always on the verge of bolting. They stay with us because we've created a relationship and safe place for them to be. In this changing, always crazy, sometimes brutal world of ours, that's hard to find.

This is only a preview. Your comment has not yet been posted.

The letters and numbers you entered did not match the image. Please try again.

As a final step before posting your comment, enter the letters and numbers you see in the image below. This prevents automated programs from posting comments.

Having trouble reading this image? View an alternate.

Comments are moderated, and will not appear until the author has approved them.

(Name is required. Email address will not be displayed with the comment.)