Do you double space after a period at the end of a sentence? If you answered: Yes, I ask: Why? 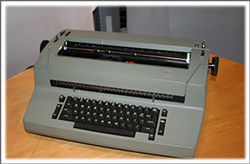 Let me guess – because your high school typing teacher told you to! Okay, I get it. You're just doing what you were told (and taught) to do. Albeit, perhaps 30 or more years ago AND you were learning on a typewriter! Well, unless you are the only one in the office still using a typewriter, it's time to stop double spacing!

Seriously – stop! Even your typing teacher uses a computer now and single spaces at the end of a sentence!

So what's the difference you may wonder? With a typewriter font, i.e., Courier, the letters are monospaced, meaning each letter uses up the same amount of space whether a W or an I. So the extra space at the end of a sentence was necessary to help break up and provide a visual guide within the open letter spacing.

Today, I have feeling most of us are using a computer with modern fonts that use proportional spacing. That is, the letters take up a proportionate amount of space based on the width of the letter itself and the surrounding letters – and to double space after a sentence creates unusual gaps of white space that may also appear proportionate to the length of the line. This is especially true if you are using full justification (but that's another story!).

Have a great week!