"Just Kidding!" and Four Other Terrible Ways to Apologize for a Social Media Mishap

Honestly, I think I’m pretty funny. I make myself laugh all the time with the thoughts that pop into my head. I’m laughing right now, in fact, as I write this thinking of the silly stuff I do sometimes. And now that cell phones are so fancy, it’s almost an instinct after something hilarious happens for those in my generation and younger to text our friends about it or post it on social media so all our friends can “Like” it. 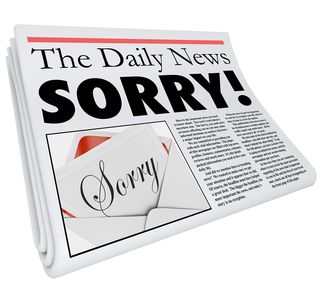 There’s times, though, when no one “Likes” your so-called “funny” post. Has this ever happened to you? You’re telling a really animated story. Your arms are flailing all around.  You bend over part of the way through to rest your hand on your knee because you can’t stop laughing long enough to keep going. Then you look up at your audience.  Their eyebrows are raised and there’s almost a squint or grimace in their eyes. It’s physically paining them for you to continue with this story. Maybe you didn’t hit the punchline quite right or build up the details in the beginning. Whatever the reason, you get stonewalled as they roll their eyes and slowly walk away. You sigh and say, “Guess you had to be there…”

Communicating clearly is certainly a gift.  It’s even more complex in print – you have no facial cues or tone of voice to gauge. For some people, clear communication is a gift that was not ever given to them. I read an article today from Ragan’s PR Daily about a scientist named Tim Hunt who recently ended up in a lot of hot water for a comment he intended as a joke that ended up costing him his job.

His “apology,” if you want to call it that, didn’t help his cause, either. Hunt didn’t even really say, “Just Kidding!” He tried to stick by what he said as being fact and that everyone else was overreacting.

Regardless, note Hunt no longer has his former position. He was fired.

I would guess the majority of comments like Hunt’s that we see get picked up in news didn’t set out with intent to offend, especially big-name brands. They say even bad publicity is good publicity, but mishaps like that might cost a company thousands of loyal customers and revenue.

One of the great things about social media is that it allows thousands of people, companies and causes to connect with seemingly such little effort. But stories like #TimHunt are good reminders that you need a social media strategy and, if nothing else, maybe a second set of eyes on that post before you hit send.

If you ever do happen to send something into the social media world that you wish you could take back, here are four really terrible ways to apologize to avoid.

Long Explanations. At this point, no explanation will make what you did okay. Just say you are sorry. That’s it.

Blame-Shift. You’ve got to take the responsibility here. It’s not because of another person or their actions. You are in control of you and what you post. Be careful, as this is true as a business owner with employees posting on your behalf. You are still responsible for what your company posts.

Ignoring Those You Hurt. Just as a general rule of thumb, steer clear of calling out certain groups of people. If this happens, you will need to identify them, specifically, in your apology.  Don’t forget those you work with that may have been impacted, too.

Best Practices
While they say actions do speak louder than words, when those words are recorded, printed and published for all the world to see, it can get messy. Do your best to have social media posting rules in place and training prior to, especially new, staff members gaining access to post on your company’s behalf.

If all else fails, before you post, ask yourself, “Would I want this printed on the front page of the newspaper tomorrow morning?” If there’s even a hint of doubt, don’t post it.