Does Santa Claus have a website? If he does, you can be sure its mobile friendly. 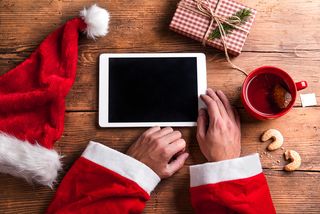 If you can’t find Santa’s personal website or Facebook page, you may want to learn about the real story behind the Santa tracking website from NORAD (North American Aerospace Defense Command).

The NORAD website says that the tradition began in 1955 when a Colorado Springs based Sears store used the wrong number for the store in a print ad. Instead of the store number, it used a phone number for the Continental Air Defense Command (CONAD, later NORAD) hotline. In response to the calls, Colonel Harry Shoup had his staff give children who called updates on Santa’s location.

But if you dig deeper, you’ll find an article from The Atlantic, which reports that the military has a long tradition of using media and Santa to promote a positive image. During World War II, Eisenhower’s headquarters issued a press release about Santa. In 1948, the State Department sent a diplomatic dispatch to Kris Kringle. And in 1950s, during the Cold War, a media savvy Colonel Shoup got a call from a child who had reversed two digits and accidentally called CONAD. The first misdial was not met with great warmth, but a savvy Colonel saw the potential for a great story. The public relations campaign grew, and decades later, NORAD has a very sophisticated website dedicated to Santa’s travels from the North Pole.

We like both stories. The first one is heartwarming, even if it is disingenuous.

We also like the second one, because it shows what can happen when someone in a leadership position is open to seeing possibilities that might not be immediately apparent to everyone.

And we do have to add this final note - if your website is not already upgraded to a responsive design, i.e., mobile-friendly, that should be the first thing on your marketing to-do list for 2016.

Posted by Jennifer Campbell Goddard on December 23, 2015 at 07:16 AM in Public Relations | Permalink